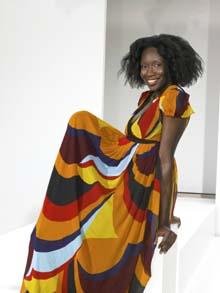 One of "Runway's" contestants, New Yorker Zulema Griffin, already has design experience under her belt.

October 17, 2005 -- New Yorkers have three local rooting interests in the upcoming second season of "Project Runway."
And the one who is showing her true colors is Zulema Griffin, a young designer with at least eight independent movies and an off-off-Broadway musical to her credit.

The producers of "Runway" have been unusually tight-lipped about the crop of 16 contestants chosen for the hit reality series that turned fashion design into "Survivor" with straight pins.

But Zulema, who's first photo for the show was by far the most outrageous, has more than a little experience in theatrical design.

She was the costume designer for "A Perfect Fit," starring Adrian Grenier from HBO's "Entourage," which debuted last summer, and "Men Without Jobs," a hip-hop buddy film also starring an HBO actor, Andre Royo from "The Wire."

She even has some TV experience, designing clothes for an ABC Family pilot called "Taylor Made," starring Erik Estrada and Nickelodeon personality Candace Bailey. The show was never made into a series.

The other New Yorkers are Daniel Vosovic, at 24, one of the youngest in the competition, and Emmett McCarthy, one of the oldest at 42.
Posted by LauraK at 6:56 AM