I Got The Season One DVD Yesterday!

Naturally I started with the "Special Features." There was a design gallery of fashions that are almost the exact same things that are on the website. There were some deleted scenes. Nothing too special - there's a reason that this stuff was cut. I did enjoy a scene where Austin was upset because Rob stole his nice clean towel - Rob's towel is hard to miss since is it covered in self-tanner....ugh. I'd be mad too, Austin. Meanwhile Jay is explaining that Austin and Rob are actually in love with one another.

Also, it's pretty apparent that Vanessa has a drinking problem...

Now, for the good part. It's called "WEAR are they now?" We start with Jay and the photo shoot for his disappointing "spread" in Elle magazine. He is insulting and crude as usual. The stylist, the hair and make-up people and the photographer are all very professional and polite. Nina Garcia and Tim Gunn and encouraging and supportive. Everyone is very patient with Jay's rudeness and interference. He expects that he will have a twelve-page spread with each outfit styled exactly like his runway show. The sylist patiently explains that perhaps it is more appropriate to mix and match the pieces in his collection with a pair of jeans or a t-shirt "like the girl on the street" would actually wear it. After the Elle shoot is complete we hear Jay's reaction. He complains, claiming that Gilles (the photographer) "Hates me because I swore in his studio." Yeah, Jay, that's what happens when you insult and offend people. I was disappointed when I saw the meager spread in Elle. Now it makes perfect sense.

Next we see Kara Saun. She is polished and lovely as usual. She might have lost some weight. She is very excited about her new opportunities. She is completely positive and professional. We see her at a Hollywood party. I featured a photo from this same party earlier in the blog. It is interesting to see the same fashions from the runway featured on different models in a more intimate setting. Go Kara!

Next is Wendy. She is focusing on a line of "mother-of-the-bride" fashions. She has moved her studio out of her basement and into a retail space "down the street." She also has an on-line boutique and seems very happy.

Next is Austin. He is in full Austin mode in his interview sporting a silk scarf nattily tossed over his shoulder and secured with a corsage. Austin is working on a Spring 2006 collection. Shouldn't we have seen this by now? Maybe he means it will be ready in Spring. Or maybe I missed it - sorry.
Austin claims that receiving the criticism from the judges was "one of the best parts" of the show. On this day Austin is serving as a judge at the New York City auditions. They admit that personality is as important as talent. On personality Austin definitely scores high. He is adorable.

Last is Robert. He is the same lovable yet really really stupid character that we saw on the show. He describes how he was a designer in Russia in 2000. We see a couple of slides of these designs. He explains that although his real last name is Plotkin, even HE has trouble pronouncing it so, he went by the very professional name of Robert Trebor. Pronounced Tray-BOR. He explains - in case we missed it - that Trebor is Robert spelled backwards. Gotta love that Rob.
Posted by LauraK at 5:41 AM 2 comments:

While I was gone on vacation this news came out. A man named Joel Lamontagne claims that he pitched the idea for Project Runway to Tony Yates at Project Greenlight in February 2003. There are about 50 on-line references (click on the link above) to this story but they all say basically the same thing:

LOS ANGELES Nov 24, 2005 — A man is suing the producers and sponsors of the cable reality show "Project Runway," charging that the Emmy-nominated series is based on a script of his that was rejected two years ago.

Joel Lamontagne, who filed the lawsuit Tuesday in Los Angeles Superior Court, claims he pitched a show called "America's Fashion Designer Search" to producer Tony Yates at Project Greenlight in February 2003. Ultimately, he was told the company was too busy to proceed.

"We think they took this idea, promoted it and it's been a big success," said Ivan Schwartz, Lamontagne's lawyer.

"Project Runway" features designers who compete in weekly fashion challenges in hopes of breaking into the business. It first aired on Bravo in December 2004 and a second season begins next month.

The lawsuit contends that Project Greenlight developed the show for Miramax Films, which then sold it to Bravo and NBC Universal. All three companies are named in the lawsuit, as well as Yates and sponsors such as the Gap, Banana Republic, Elle magazine and L'Oreal.

Schwartz said the lawsuit seeks "tens to hundreds of millions of dollars" in damages.
Posted by LauraK at 12:08 PM No comments:

The Project Runway website has been updated! Check it out!
Posted by LauraK at 11:04 AM No comments:

The December issue of Elle magazine has plenty of Project Runway news. One especially interesting tidbit is this "...He's referring to his prize as the Runway winner, $100,000 plus a Banana Republic "mentorship" which McCarroll eventually declined in favor of working on his own." Apparently Jay is just too good to work with Banana Republic.

Of course earlier in the interview Jay's typical rudeness and vulgarity are evident. Gee I can hardly wait for Project Jay.

The big news is this: There is a Project Runway magazine coming out which is supposed to be available exclusively at Banana Republic stores on December 7th. What fun!
Posted by LauraK at 2:12 PM 1 comment: 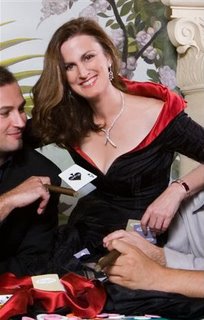 I watched Wendy on "Celebrity Poker" last night. I also spotted her on "Battle of the Network Reality Stars." In both cases she seemed lovely. Attractive, charming, and rather quiet, ladylike and composed. It seems to me that she is the biggest star of Project Runway.

All media references to Jay seem to be negative. He is vulgar, crude, drunk or just impolite. In at least one case he later apologized for his extreme rudeness claiming drunkenness as an excuse. In every interview half of the words are bl**ped out. It was kind of funny at first, Jay, but it's getting old. Grow up - try to be more like Wendy....
Posted by LauraK at 7:28 AM 3 comments:

Just about a month remains until the premiere of Project Runway Two! Meanwhile, here is a link to all of the scheduled Project Runway shows building up to and beyond the premiere. It looks like we'll have plenty of opportunities to view each episode. There's also a Project Runway One marathon on November 19th and a build-up marathon all day on the 7th of December. of course, by then I'll have the DVD!
Posted by LauraK at 6:29 PM 2 comments: