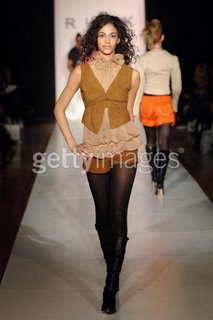 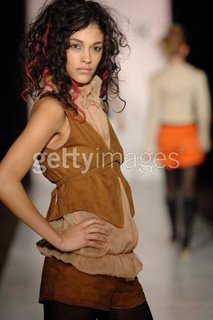 Click here for an article about Jay McCarroll. Thanks Teresa.

I'm getting some mentions about The Star article featuring Santino, but I haven't seen it yet. Does anyone want to share? Any new information?

Here is a link to an eBay auction of one of Andrae's designs. Did you know he just closed his boutique? I would imagine that he might be emotionally bedraggled....Just teasing, Andrae, we love you here!
Posted by LauraK at 11:19 AM

I dig seeing the models during Fashion Week.

LK, Santino has a scan of the Star article on his blog:
http://santinorice.com/uploaded_images/santino-star-web.jpg

Nothing majorly new, just reiterating that he gives good TV and Tim is featured as well:)

oh, no... if heather's there, santino can't be far behind.

Andrae mentioned that he had closed his boutique before he went on PR. That's what led to his early emotional outburst on the runway.

Is that true? Because we also saw Grace at another show.

I don't think the models can't work for anything other than PR.

I don't think the models appearing during fashion week for another designer means anything good or bad for the remaining 5 designers.

I think this means that "our" models are totally famous and in demand by all of the designers. They are celebrities - absolutely! Go Project Runway!

LK, I was actually wondering what shows Grace and Heather were modeling for...any clue?

Grace is modeling for a designer named Dragana Ognjenovic. This name is not familiar to me. I'm not sure about Heather - The Scarlett sent me the photos. Scar? Most of the news today has been provided by all of you - thanks! Things are really getting exciting!

Heather is in the RUSK show.

Dragana Ognjenovic is a designer from Beograd (Belgrade), Serbia. I think this was her first showing in New York..

Re: Jay McCarroll article. I may be totally wrong, but nothing I read or see about him says that he is going to make it. Or, at least I think he has a tough road ahead even if he does make it in the end. I had not heard that he talked Bravo into doing this show, Project Jay. Even though he claims that he's uncomfortable with "celebrity", I think that says something else entirely. I always kind of had this lingering feeling that Kara Saun should have won, and I still think that.

You all are totally brilliant. I just put stuff out there and you give me all the answers! Thanks for keeping this going. : )