WHAT? Not Everyone is a Project Runway Fan?!?!? 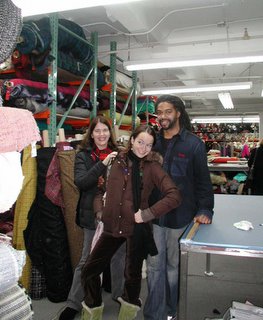 During our recent visit to New York I was determined to visit some Project Runway haunts. Of course I wanted to go to Mood Fabrics, Parsons, Atlas Apartments, and Bryant Park. Well, 90% of our trip was occupied with locating an apartment. We found ourselves at about 3:00 PM on the last day of our trip finally ready to do the "PR Tour." I decided to prioritize. Mood was essential. I thought we could walk in and find someone who worked there and ask to see "the striped fabric that Nick used on thhe Barbie challenge" or the "red fabric with the holes that Diana used for her hoodie." I was wrong.

Not one single person who was working at the store had any idea what we were asking for. We could find only one woman who had EVER watched the show. She "missed the episode" that I was asking about. One person remarked that "They film in here." Another - Todd - says he even had to sign a waiver because he was on camera cutting fabric but he STILL has never watched the show. I asked him if it was last season or this season and he said he didn't know. (Is there a gag order? Is he kidding me?)

Well, let me tell you. Mood is incredible. There are two floors of fabulous fabric. A third floor is being added for home decorating fabrics. Anything a designer could ever possibly want and more. I recall Andrae saying once that it was difficult to shop there because it was so overwhelming. I can understand. I didn't buy anything simply because I couldn't choose. We made nuisances of ourselves and left after about an hour. I could have stayed all day.

The photo is of me, Kaitlin and Todd.
Posted by LauraK at 5:33 PM

Soooooo jealous that you got to go to Mood, but how could the people who work there not be PR fans? My universe, she is turned upside down!

I was at Mood in November. I too was thoroughly overwhelmed! It was the only fabric store where I did not purchase anything. :-O There's always next year!