"Everybody Loves A Train Wreck." 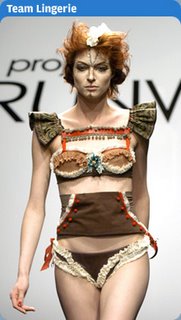 Wow. The Barbie challenge was so great and this one was so bad. Am I watching the same show?

Santino's collection was horrendous! Are you serious? Laughable. "Hey Santino, Gepetto called, he wants his cuckoo clock girls back." I can't believe Santino survived. I posted on one of the boards that I believe the producers kept him for drama.

Remember when Austin made that horrible "wedding gown?" Well, somehow he survived. Of course, because he was a fan favorite and people were tuning in to see him. No matter how bad the dress was, he got a "pass." I think the same thing has happened to Santino. The producers know that he is entertaining and fans are enjoying watching him every week. People have more to say about him than anyone else. It's great to watch a giant unchecked ego. He is completely out of touch with reality.

Now that he has offended just about every contestant, every judge and most of the fans, things should get REALLY interesting. What will happen on January 4th? (Remember, there is no new episode next Wednesday - just reruns - then "Social Scene" on January 4th.)

Santino had better come up with an undisputably winning design. He is in for it. No more "passes."

"Everybody Loves A Train Wreck" Tim Gunn
Posted by LauraK at 11:23 PM

And there is no way Santino should have stayed. I was almost convinced they were going to boot his ass when he didn't take responsibility for the hideous designs.

I liked poor Daniel's lingerie. And his gesture was heartbreaking.

I was so upset! I thought Santino would be out for sure between his HIDEOUS collection and his bad attitude.

When he was talking about the concept, and saying it was lingerie based off leiderhosen... I said to my boyfriend, "riiiight, because leiderhosen are SO SEXY."

I am still stunned that SantEgo and his Heidi The Ho collection were not eliminated! Blech. Daniel Franco had such class, dignity and integrity. If you listen to Tim Gunn's podcast it seems his willingness to take full responsibility for the collection cost him in the end.

I have nothing different to say but need to comment. I thought Santino's collection was hideous. But I also knew he would be kept and poor Daniel's head was on the block simply because Santino makes good TV.

Rememeber that the producers have a say in who stays and who goes. Santino provides more ratings than Daniel.

I also think Daniel acted like a gentleman whereas Santino acted like a creep. A creep to match his HORRID lingerie. I mean really, were the outfits supposed to be wearable. Uggghhh

I'm sure the drama factor had something to do with it, but I also think their performance on past challenges was probably part of the reason Santino stayed and Daniel was declared "out." Both clearly have talent, but Santino is more unique and visionary, while Daniel's strengths seem to be quality and tailoring. Daniel's style isn't really suited to the fast pace and high pressure of reality TV -- he was just going to continue to struggle to get things done on time.

He really did leave with great integrity and compassion -- I loved the way he cut Chloe off before she had to say that Daniel would be the one she would cut from their team. I think he really wanted to spare her from having to turn on him like that, and that was just adorably kind and adult of him. Soooo the opposite of Santino, who was just a brat.

I'm cheering for Nick. I think he did the best job of interpreting Santino's vision and making something very nearly wearable out of it. I thought his look was better than all of the tattered bondage Diana put on the runway.

I was disappointed that Nick chose Emmett as the team's weak link rather than Santino, but again I think he was swayed by what he's seen in previous challenges, when Santino has done quite well and when Emmett has been meh. Also, he probably knew that Emmett would handle it with maturity, while Santino would have a huge hissy fit if Nick "betrayed" him.

Perhaps Santino's collection was meant to be a slap at Ms Heidi of the Alps...well yes of course. It's just that Santino doesn't play well with others and made the mistake of giving the most ironic design to the person with the least wit!

I agree with what everyone has said about Daniel's wonderful gesture.

I think he accomplished all he needed on the show - and he proved that he was just too good for the fast pace. He appreciates quality and craftmanship, and he can't throw a garment together in 12 hours.

After seeing him on the show - I would definitely buy his clothes!

Someone should email him a link to these comments. He stood out as the winner for me on the episode he was "out."

Santino's big argument of "Well, (the clothes) are supposed to come off!" is like, hunh??? Don't you want to inspire women to feel sexy in a romantic setting so that they WANT to remove their clothing, not have them feel so EMBARRASSED and FOOLISH that they'd rather be NUDE and EXPOSED rather than look like they're about to go milk a cow?

I thought all of the concepts were hideous. This shouldn't have been a team challenge.

Keeping Santino is all about the ratings. He is good television and talented enough to justify keeping him on. Do I want him to win? Nope. But I'm pulling for him to make it to the final four so that we can trash him more.

I thought Daniel Franco was a gentleman through and through. If this hadn't been a team challenge I could have seen Marla being told 'auf wiedersehen' long before Daniel F. I admire his dignity and his talent ... just not his work methods.

all i have to say is Santino sucks, and Danile Franco rules!!

The producers chose Santino--he has Diva fits and the meltdowns are so very dramatic. If--and I hope it's if--he makes it to the end--it will be a Wendy gesture. She never had a chance of winning but would we have watched without her? No.

Daniel did the right thing--it was his fault. the girls did everything he asked of them. Great teamwork: weak result.

I think Andrea will be next to be chosen "out" because he always seems like nervious wreck, and it seems like to me he cant control his fellings. Daniel did di the right thing, but common Santino made freaking clothes for Deer!!!

I am now rooting for daniel vosivich, he makes great desgines.