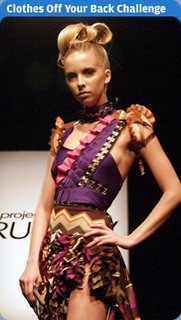 Here is an interesting article about Guadalupe Vidal. Apparently Lupe used parts of her shoes for the shoulders of this garment - and even her underwear elastic - which I can't quite identify. Her boyfriend placed the winning bid for her outfit. That's true love.

Edited to add: Okay I know the link requires a registration or something - sorry - here is a quote from the article:

Vidal packed two bags and flew to New York for the taping. For her first task, she had to turn the blah muslin into an ensemble that best represented her. The second challenge required contestants to take the clothes off their backs and create an outfit.

"I was jumping up and down. I thought it was genius," Vidal said. "Everyone was moaning about their lucky pants, heirloom this and that. But the outfit I had on cost me $15 at the thrift store."

And viewers didn't know this, but Vidal used everything she wore to create what looked like a shredded-ribbon mini dress fit for a Japanese anime character. She cut up her shoes to create the shoulder sleeve caps. She even used her underwear.

"I used the elastic as trim," she said, laughing. Her boyfriend, Nelson, wound up forking over $210 to buy the outfit from the "Project Runway" online auction because he didn't want anyone to have her underwear.
Posted by LauraK at 9:27 AM

(I have to check your blog more often.) This is kinda what I was talking about on my barely-more-recent "anonymous" comment about Guadalupe. She's got some color and angle ideas that I don't see in the others, and I think that sets her up well for tonight's episode (unless it was, indeed, she who was arguing with Tim--then she's cooked).

I think the very last sentence about her boyfriend not wanting anyone else having her underwear is hilarious. I like this blog!