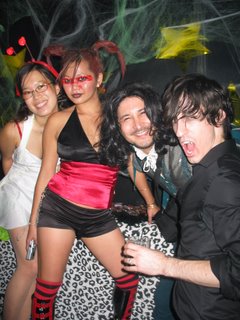 Where is Daniel Vosovic? Anyone know? He sure is keeping a low profile. This is the only news reference I've been able to find for him. I posted this article earlier - it isn't new. So how about it? Anyone out there know anything about Danny V? His website, myspace, anything at all?

I do not for one minute think that this has anything to do with "Oh the producers have instructed the designers to maintain internet silence until the show finale."

I had e-mails from several designers and when I asked if I could post their messages they would always say, "let me check and get back to you." Then sometimes, they would say "Okay you can post." So obviously the producers are allowing communication.

Once again, let me say that no one has ever revealed anything spoiler-ish to me about anything. Trust me, I don't want to know.

The designers have been out there communicating with the public throughout the season. If they were doing anything wrong they would have been called on it. And if the rules were different because some are in the "final three" or "final four" that would make it REALLY easy for us to determine who it will be just by examining who is incommunicado. That wouldn't make sense.

Do we assume that Daniel is just busy because he is working on his Fashion Week collection? I don't think so. If the show was filmed over the summer and they have to present the collection in February then that is 6 months to make 12 outfits. To quote John Wade "It doesn't take that long."

So, if anyone knows anything about Daniel Vosovic, could you please share the love? I'm trying to maintain a rather exhaustive list of links here and I have nothing for Danny V. Let's fix this - thanks!
(Thanks to Daniel Franco for this photo.)

I just read Daniel V's bio and Q&A again on the official website. Daniel was a competitive gymnast and dancer for many years. He will certainly know something about constructing a skating costume! Hmmmmmm....
Posted by LauraK at 2:04 PM

i WISH someone could find something out about Danny V, but i don't ahve anything, but for all of you BPR fans out there, please visit: www.projectdesigner2.blogspot.com As well as Project Runway i am trying to find the next great fashion designer. So...every week 17 contestants battle it out, JUST LIKE project runway, except they draw the designs (and VERY well i might add) SO PLEASE *begging* check it out!!! Thanx!

Hey Chris, I'll add a link to your site.

I want some more of danny v.

So I can drool at him.

And yes, I realize that was a fangirl post.

i can never find anything on him either- it pretty much sucks.

did daniel franco send you that photo? or did you get it from his website? (just wondering)

I have a MAJOR crush on Daniel V so any info would be awesome!!!

Daniel Franco sent me four photos. I've used three of them. The last one is of him and Diana. I don't think they are anything exclusive. Feel free to share. (One is him and Kevin Johnn and one is just him.)

who else is not communicating besides Daniel V?

More info on Daniel V would be fabulous! He wonderful on the show and I'll admit to having a tiny crush as well. With him and Nick as my faves, I've gone through Nick's entire website and have further impressed by his skills. I want to see more DV!

He seems to kind of keep to himself. Maybe he's just shy.

He's very talented. I think he should win.

Get one of your fans to help you with it :)

I have some information on Danny V. According to Diana Eng, he is single now and is on the prowl. He is looking for some rock/alternative sort of guys. Thats about all I know as of yet.

He's so talented and creative. I love his calm and cool demeanor--no silly drama over stress.

And I love the way he fusses with his bangs!

He must be in the final three--I found this site while searching his name. There's nothing else out there.

Friendster account--shows that he was a vampire for Halloween.

Love the teeth with that smile!