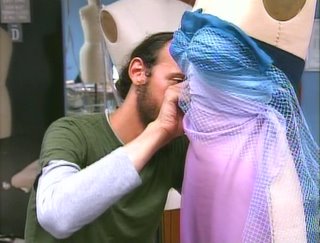 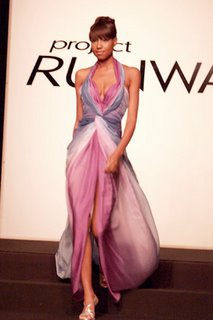 Thanks to totesumbrellas for this very interesting observation. This is Austin Scarlett's "Nancy O'Dell dress." Remember, this gorgeous dress is the one that sent Austin home. Martinique was definitely my favorite model too.
Posted by LauraK at 6:51 AM

i am more than 504920% confident that santino, given the *exact same* fabric, tools, and constraints, would never ever construct anything remotely as graceful, feminine, and beautiful as austin's designs. it would be absolutely unthinkable.

austin creates dresses to render a woman a goddess. a helen, a grace kelly, a venus on the half-shell.

santino creates dresses to render a woman a hydra-medusa-phoenix-cerebus. with bloody tears, bitterness, and a foofy backside.

but in any case, i hope santino botches things up so badly that the producers really cannot justify him as a lasting contestant any longer. i'm really disappointed they have kept him on this long. his entertainment is of the crude egomaniac variety... i'd rather follow andrae's intermittent accent or uncle nick's eyebrows! :)

I don't know.. from the ep8 preview, Santino says he's going to hold back and not go over the top because he doesn't want to take the chance of getting auf'ed. We still don't even know WHAT this challenge is, do we?

As much as I'd like to see Santino go home, I'd MUCH rather see Nick win and have Zulema auf'ed. Teach that bitch a lesson.

The name episode 8 is "Inspiration." Maybe they have to make a design "inspired" by a previous design.

Rhonda, that would make so much sense because Jay is the guest judge and all. I think you may be on to something.

as much as everyone hates Santino, he obviously has talent. and for as often as he's been in the bottom, he's been in the top just as much. there hasn't been an episode where he was just "safe." he's always on the runway for questions. he just has issues when designing something that he can't do just a dress. i'm interested to see what happens and i think he's deserving of a chance.

Actually, Rhonda, that is a GREAT idea. The TVGuide listing says something about being inspired by their surroundings.... I'm planning a speculation post for Monday. Meanwhile, everyone keep your eyes peeled for clues.

Rhonda, that's a great theory. The colors seem very un-Santino, and you know that Nina Garcia would instantly recognize that as an Austin-esque dress. And Christine, you're right too, the flowy Grace Kelly style is also very un-Santino. It's still intriguing... I'll be excited for next week.

But Rhonda may very well be right. It would make a Lot of sense with Jay being there....

i am confused! i haven't seen Season 1, but that Austin dress is absolutely stunning and i have no idea how he could POSSIBLY get booted for it

Welcome, Origami. I won't even try to explain this - Please buy, borrow, or rent Season One and you will understand everything.....Seriously, there are so many references to Season One designers, inside jokes, etc. that you will enjoy season two much more if you watch Season One.

hi origami express -- you are understandably confused. yes, that beautiful dress of austin's was not 'addressing the challenge'. according to the judges it was too 'oscar red carpet' than the 'grammys'. so basically it was criticised as making her too formal, and too elegant for such an occasion. (since when is that a problem?) and if you saw the trashy-trendy-FEATHERED wendy pepper dress that nancy o'dell picked, you would be basking--nay, drowning--in incredulity. i was equally confused, in the same good-doesnt-mean-good? way, this 2nd season when the banana republic people kept telling chloe and emmett their design looked 'too expensive.' i dont see how that is a downfall at all, especially for a brand that prides itself on creative classy designs like banana...

The judges (well... Nina Garcia) often says a design isn't "elegant" enough. Yet when Chloe and Emmett gave them "elegance" in the Banana challenge - they said it was too "Bergdorf." Grrrrrr....

Did anyone SEE THE DRESS Nancy O'Dell wore to the Globes? HORRID!!!

It's SO frustrating to listen to the judges constantly contradict themselves! The Banana challenge is a good example...as is the lingerie challenge, saying that Daniel Franco's was too wearable. I'm sorry...what?! Makes no damn sense...

I think Austin became a sacrificial lamb on that challenge. With Kara and Jay also making subpar Grammy designs (although I would disagree) and Wendy winning the challenge, they got rid of Austin. I think that everyone thought it would be Kara, Jay and Austin @ fashion week, but then Wendy screwed it up by winning!

They couldn't spare Kara or Jay at fashion week, and aufed Austin...I was FURIOUS!!

Anyway...I think Rhonda might be onto something. What if the color scheme is so similar because Santino's assignment was to make a garment inspired by Austin' Grammy dress? We'll have to see...

I love the spunk and passion of your posts.

Awww, thanks Don! I am super opinionated and passionate when it comes to fashion :) I enjoy ALL aspects and have really liked hearing what everyone else on this board thinks.

Oh...and Libra's rock, although for the longest time I thuoght my birthday must have been wrong. That was until I realized my ability to overthink EVERY decision...Libra to the core!

Wait a second! MY birthday is October 7th!

AJ:
Man, does that "overthink" comment hit a raw nerve. You could not have said more to tag me, if you had a hundred words.For instance, I've been trying to decide whether to move, where, and such for about two years. Typical!!

Of course, there's also the "signature" Libra sensitivity, love of beauty and, yes, luxury, and the need for serenity and peace in ones environment, as well as "inside ones own head", so to speak'.

Hey, that's wild!! Whoever would have thunk!!

I used to call it indecisaphobia (inability to make decisions without severe panic...lol)

I do enjoy beauty and luxury, hence my love of fashion. Peace of mind is something I've yet to accomplish...lol

And as far as moving goes...will you be happier if you move? You gotta do what's best for you!!

Santino is into, as Kevin from PR1 would say, "Oscar Rock/"