Maybe These Will Help.

Maybe not. We can see little glimpses of the garments from this week's challenge in these screencaps. By the way, Nick and Santino both look great in pink... It takes a big man to wear pink you know...

ETA: Is anyone else tired of the Elle cover of Alicia Keys? Hopefully they'll switch it for a new one soon! 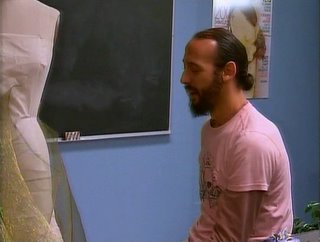 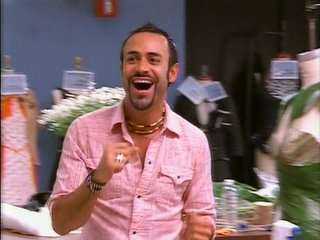 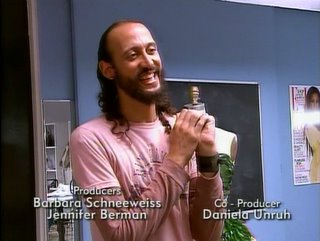 Thanks Katey! Be sure to check out Katey's blog for an article about Diana!
Posted by LauraK at 9:47 AM

I was sick of that Elle cover when it sat in my house for months. I don't remember why I hung on to it for so long - there must have been some good stuff in there.

I LOVE that green color behind Santino in the bottom picture. What little we see of the silhouette looks pretty too, but that bright emerald green is pretty rare to see as an all-over color. I think it'll be pretty.

I'm already discouraged about this episode. This is a silly challenge at this stage of the game, and to offer immunity for it??

I'm just praying that my beloved Chloe can get through this.

i love that green too!! it looks like a bunch of wet or waxy leaves, leaving a nice texture for the eye.

i agree that immunity is very strange to bring in now. my guess is that they believe a certain someone (santino) would do well in this one, and so they offer immunity to get him into the top 3/4 because he might actually make interesting stuff for fashion week. think about how embarassing it would be for BRAVO and michael kors and nina garcia if designers like kara and chloe made it to the final three by fluke. they need someone who is going to do really exciting and innovative designs, like jay did last year. santino will definitely make an interesting line if he gets the chance.

I've determined nothing from these aside from agreement with Laura that Santino and Nick both look good in pink!

They also both look happy, which I guess is a good thing. Nick is clearly back in action...at least I hope!

i think the green is nick's dress. santino seems to be working with something gold and sheer.

btw, just because i'm so happy about it, i have to say: I GOT MY DOLL! i am waaaaaay too excited over Nick's Barbie, but still.. I got my doll! alright, that's enough chair dancing.

Oh, I totally forgot that I ordered one the other night! I broke down and bought one:)

I came thisclose to also buying the new shirt w/ andrae's design. It says "Lighten up, it's just fashion" Then I realized I could only justify one unnecessary purchase that night...LOL

Phillykat I'm so excited for you! Are you going to open the doll and play with her, or keep her in the box? And where is your picture?

Nick wears pink a lot better than Santino does. ;)

On a related note, Alicia Keys is on David Letterman tonight.

I'm really disappointed. Using plant material ensures that this challenge will be fraught with complications. I won't even go into the silliness of it. I can't wait to hear what Tim has to say about it.

"On a related note, Alicia Keys is on David Letterman tonight."

That made me laugh for some odd reason :)

I'm just hoping against hope (and being totally nerdy while doing it) that the bad feelings about Nick biting it this week aren't right.

Assuming that this challenge has more to do with plantlife and less to do with actual fabric, then this challenge is destined to be crap. I don't think that, at this point in the competition, it is a good indicator of who should remain in this competition. This is the final six...half of these designer will be at fashion week. Don't you think it's stupid to have a materials challenge so late and risk having one of the better designers bite the dust because they are not working with actual fabric.

At this point it seems as though Daniel V (just one example) is a heavy favorite to make it to Fashion Week and possibly win the whole thing. He's won the most challenges, etc... Lets say that hypothetically he has no idea how to make a garment out of plants and gets cut this week. How does that make ANY sense? And the scary thing is that, with a challenge like this, something similar to the above scenario could happen.

And bringing immunity in just makes it more ridiculous. Ensuring someone a spot in the top 4 with a challenge like this is a stupid move. Arguably, the best challenge for immunity would have been the most recent one about Inspiration (and no, not cuz Daniel V won it...lol). That challenge had to do with vision and I don't see how a challenge based on plantlife can provide the same aesthetic for a designer.

Pardon the rant, and this is all in assumption that flowers and plantlife play a rather large role...I guess we'll see tomorrow.

The director/creators of the show are far too shrewd to grant immunity (as it's being interpreted here) at this stage of the game. I am willing to bet that the sound byte of Tim regarding immunity has to do with something OTHER than immunity from being eliminated in the subsequent challenge. Maybe this is a two-part challenge and the winner of part one doesn't have to complete part two; or the winner of part one is safe from elimination THIS episode? I think "immunity" is a reality show buzz word (it certainly has all of us talking/typing). I'll bet it's more complex than "tonight's winner is safe next week." I hope that's the case. And I hope my Nick doesn't lose tonight!

Tom in KC - you have an interesting idea there. We'll see....