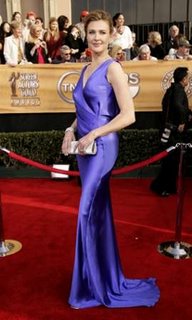 Here is a link to more images of Brenda Strong at the SAG Awards. (Just do a search for Brenda Strong.) This is a gorgeous color on her, Nick. She looks fabulous!
Posted by LauraK at 7:34 PM

Wow! That really looks like a Nick dress. The back is really cool looking from what I could see in those photos.

What a gorgeous dress :)

Aaahhhhh I heart Nick! And Daniel V. and Chloe too! These three BETTER be the top three!!!

It's SO beautiful! When I first saw her on the red carpet, the color was just "wow!"

And then when DH won, and you could see the back and everything, just a stunning dress. Plus, for some strange reason most of the Desperate cast wore purple gowns, but when they were onstage, Brenda really popped because the color of hers was much richer and vibrant.

Nick did a wonderful design!...per usual;)

I knew the dress was Nick's right when I saw it, without even knowing who he designed it for!
It's great that he has a style that permeates all of his garments.

I wonder if the cast of Desperate Housewives discussed their gowns before. It seems strange that almost all of them were wearing purple. This one was the best color though.

I wouldn't know Brenda at all, but the minute she stepped on stage, I recognized the back to that dress. I believe it was the take-my-picture-because-I'm-beautiful-from-all-angles drape of the NH challenge. What a great dress!

The gown is too long and too unembellished. The bag (not Nick's fault unless he doubled as Fashion Consultant) is beyond LAME. And how about a flash of jewelry somewhere, even a silver ArtDeco-y broach at the waistline or somewhere on the bodice.

Am I asking too much? Yes, the color Is lovely and the back "makes a statement " but....how many remember the backs of any of those breathtaking Hollywood and Haute Couture gowns from the 30s/40s that were all slithery silk and such that Nick is presumably using here as a reference (inspiration!!) ?

I feel that posters' affection for Nick (most of it transferred from Daniel F) and admirable, if biased, desire to cheer him on might have begun to seriously influence their critical judgment. Sorry.

Thanks everyone for your comments. Don, my blog would be totally boring if everyone just agreed with me! There is more info about the dress (and jewelry) in Nick's blog today.

I genuinely liked it though, maybe it's the rabid fan in me, but I thought it was perfect on her.

Even I agree with the comments that the dress is boring - and I'm a die-hard Nick fan (although, less so after seeing him mope and give up this week).

I just don't think the dress is flattering for her shape, either. She sorta looks like a drag queen. And from all those bra-Seinfeld episodes, I know she isn't a dude.

i agree with the "boring" statement as well. nick does beauty fine, but it's the more artistic, high-art coutoure and unusual that interests me the most. i wish they had more challenges on project runway testing those areas in the designers. i thought this last challenge would have brought it out more, but it didn't! everyone was too scared, or no one has it in them. i think andrae and santino have that in them, but it's only slightly shown so far.

seeing as the high=coutoure has almost vanished in comparison to earlier times, i would hope that project runway and tim, etc, would want to get designers in that can do and want to do that as well.

In order to present any "Couture" on Project Runway, we're going to have to allow the designers a LOT more time! Oh - I just remembered, Andre's Barbie dress was described as "couture."

They're not rewarded for couture--the lingerie challenge--case in point. Andrae's Barbie dress wasn't liked b/c it was "couture." If I was a contestant and my goal was to get to Fashion week, I'd try to stay in the area between not totally boring but not outrageous.

In other words, the message is "be average", "conform", "don't flame".

In hindsight, Andrae's Barbie was incredibly inventive, if more than a tad outrageous.

And wasn't this week's Daniel project "haute couture", if not a nudge even BEYOND couture. (I've called it "an Objet d"Art" elsewhere.) And Chloe and Emmett's BR challenge was soooo couture, AND criticized for it.
Conclusion: YOU JUST CAN'T WIN!!!

Personal Note: when I was in an MFA program (Theater Arts, with a focus on playwriting) extreme experiment was discouraged. We were in effect being taught how to be mainstream and ***ugh..... (sigh)*** blatantly commercial. There's so much boring drek out there already, why add more to the pile? In hindsight it's clear that I was less creative/experimental/risktaking at the end of this program (indoctrination/programing) than I was before. And that's tragic. (I already had an established track record.)

I hope this isn't in the end what Prooject Runway is all about, and possibly why our favoutite, Austin, didn't make it to the Final Three in season one (even more than the freaky guest judge mishap). Yes, his market is proably relatively narrow and specialized, but he is such an absolute genius and magician within that narrow focus--as long as he is allowed/allows himself to fly. Fly, Austin!!!

i doubt anyone's reading this thread anymore, but i will qualify what i was saying:

andrae's was coutoure on the barbie challenge, but it was the WRONG time to be doing coutoure. it didn't fit with the challenge.

i think that a challenge or two that called for a more wild creativity would be a nice test of a well-rounded designer. i thought that daniel's was the most coutoure among the last challenge, and i was disappointed no one else went that route. i can understand the fear to play it safe, and i can totally relate to your experience, fashionasart. i'm a philosophy graduate, and academia has the same problem:

we study and admire the thinkers that wrote differently, thought differently, and had new ideas, but we are not allowed to do the same. we are only allowed to comment upon the creativity, and not create ourselves.

capitalism is the problem. tee hee.