Thanks again to Dianne C for the great shots. These are from the window at the Banana Republic in Rockefeller Center. It's great to see the sequin detailing close up, isn't it? This is not at all how I imagined it. It seems that Zulema started with a simple sequin chain and arranged it into this design and then glued it on. Somehow she kept the two sides symmetric. Impressive. 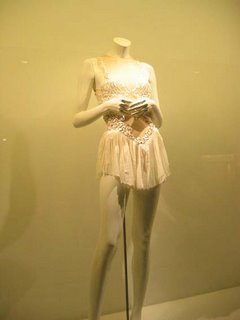 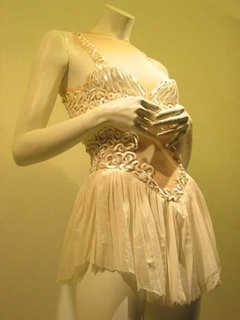 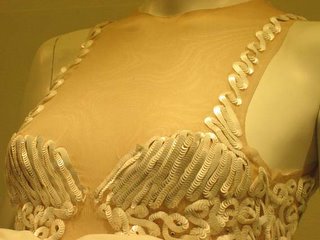 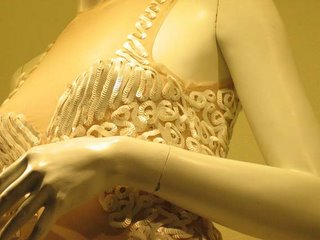 Wow, that is really impressive! I, for some reason, thought it was soutache with sequin accents.

Agreed! It looks much more finely worked in these photos and the fleshtone fabric looks much better integrated. Thank you for these shots!

Yes thanks for the shots! This really looks much better than I thought it did.

on tv it just looks like an overly decorated cake and these shots definitely prove otherwise. For never having worked with sequins before, I think that Zulema did a wonderful job.

I agree with what everyone has said so far!

I thought that on Rachel, it did look quite elegant. I don't know that I liked it as much as Chloe's but if you imagine it on Sasha while she's skating and see how she would appear nude-ish without it being "vulgar" then it was a nice choice as the winner.

I think these close-ups of the detailing confirm that.

The pictures look so much better than on TV. I think it also helps that the mannequin isn't slumped over like her model sort of looked like on TV.

Beautiful pictures! In the photos, the bodice looks tasteful and flattering, but on the screen, the model looked a little paunchy. Perhaps that's to do with the slumping mentioned by the poster above? Anyway, my faith in this design is restored!

That is so much more impressive than it was on tv. The sequins look really nice close up. They looked kind of blah on tv.

Wow. I KNEW it was nice. It's really neat to see all the detail close up!

I too am impressed with how it looks in these photographs. Thanks!

Has there been any photos of Sasha Cohen wearing the dress?

This is fascinating and very impressive.

What a shame that photos on the official site are such poor quality. Don't they realize we LOVE detail?