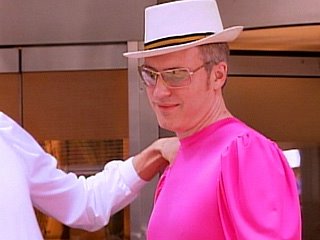 After receiving a comment from Irene Done about the rhinestone monogram on Emmett's shirt at the end of the episode I thought Hmmmmmm.... I'll ask Emmett.

I asked whose idea it was to monogram the shirts. Who actually did it? and, Where is his shirt now? I also asked if he kept in touch with any of the designers.

Here is his response:


Thank you for your support for my participation on Project Runway.
When I opened the box with the pink shirt l thought, Oh God! But when handed the ball, you must run with it! It is a game after all!
It was my idea to wear them on the runway just to prove that it was a challenge on many fronts.
The "E" was glued on by Chloe and Kara glued on "N" for Nick onto his shirt. Nick's original shirt was put in the laundry before filming, so at the last minute l helped him whip one up out of fabric from Kara.
It was a lot of fun working with a group of talented designers. I have remained friends with all the cast members, l have special affection for Kara & Chloe.
The pink shirt l left behind as l did not think it would work in my wardrobe.


l will check out your website.
best wishes,
Emmett

The pink shirt I left behind as I did not think it would work in my wardrobe : )
Posted by LauraK at 9:27 AM

Isn't that just the sweetest thing you've ever read? *Swoon*

Emmett - you left a mark of class, integrity and elegance. Bravo!

Hooray! I knew there was a reason I liked Emmett :)

I loved Emmett and his huge doe eyes! He always was such a gentleman and looked so startled, as if foul language from others didn't offend but confounded him. He seems to be from another time. I wish him well!

Ever the gentleman! I will miss him!

I knew I always liked Emmett. Plus, I always think his designs are classy and right up my alley.

I loved Emmett's designs, for the most part, and then the camera would pan to him and I'd become a teenage girl - swooning over the tv. sigh... ;)

I think we all can agree on this one: EMMETT IS A CLASS ACT.

The funniest moment in PR 2nd Season so far (seeing Emmett in the shirt arrive at the apartment was a close second) was Emmet's fabulous exit line:
"WAS IT THE SHIRT?!!"

He's delicious in more ways than one!!! And it would be redundant to wish his luck. Luck is Emmett's middle name.