at the Maker Faire in San Mateo, CA 4.22.06
- a report by areback, guest BPR journalist 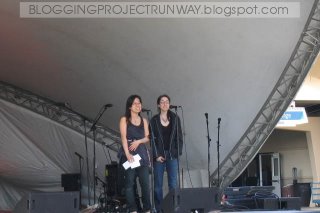 Click here for a slideshow of areback's photos from the event.

The show was held at the Maker Faire, an energetic gathering of eclectic tinkerers, crafters, adults, and kids displaying their creations, playing with home-built projects, riding self-balancing unicycles, and shooting explosive fireballs into the air. Think Burning Man with modern sensibilities, less desert and more urban, technology focused, and family friendly. Despite being the final event of a long day, the fashion show still drew an enthusiastic audience of several hundred people.

The show opened with "Biomimetic Clothing," based on living, biological creatures, and in this instance consisting of clothing that transformed as the wearer required. While conceptually intriguing, the actual clothing transformation was quite subtle. A moved skirt or reversed blouse yielded a different cut or revealed a different material [see pics for the models transforming the clothes on the runway].

Eye-catching colors and patterns and mathematical jest excited the audience as part of "Mathematic Knits," shown previously on Diana's website. Diana's bright yellow scarf and royal blue dress were knit in patterns based on the mathematical Fibonacci numbers.

Two very cool concepts, the PCB Radio and Heartbeat Hoodie kept the technologically and mathematically-savvy audience intrigued. A wearable radio with components distributed across the wearer's body, the PCB radio included speaker earrings, a tuner necklace, and jokingly a whimsical "old school" metal antenna that pulled out of the model's head. With a webcam tucked into the hood of the sweatshirt, the Heartbeat Hoodie promised to take pictures at an increasing rate as the wearer's heartbeat increased, ensuring that folks watching from home could keep track of the athlete's progress over the course of a run.

Diana then showed her Mobius Strip Bag, possibly the first clothing accessory ever to have only a single side. This accessory was another of Diana's convertible products, and this time the model seemed to struggle a bit with what seemed like a stuck zipper. As with the convertible outfits, the concept may have outshone the execution -- or the impact may have been lost with the brief runway demonstration.

The grand finale of the show, the Inflatable Dress, certainly drew gazes from across the Faire. A grand white dress with exposed mechanical parts consisting of a pump and tubes protruding from the wearer's back, the Inflatable Dress appeared unwieldy, although the model did an admirable job making it look comfortable. Diana explained that the inflatable dress could transform a sleek casual dress into a gallant ball gown. Unfortunately a slow pump required several minutes to inflate the dress so the impact of the inflation was not obvious. More significantly, the dress looked like a science experiment with the pump appearing to inflate plastic bags which seemed to substitute for dress material. That may have been the point at the Maker Faire, but far more effective would to have put an elegant finish over the inflatable bladders to better convey the designer's vision for the piece.

All-in-all Diana put on a fun show and the audience remained thoroughly enthused throughout the presentation. Her exploration of technology-infused fashion is at the same time intriguing and ponderous. Does Diana really believe that technology should be integrated with fashion, and if so, can her designs move beyond technology explorations? Hopefully by her next show Diana will have brought more of her fashion sense to her technology sense so she'll show products that are not only high-tech, but also beautiful, wearable garments.

Thanks, areback, for sharing your story with the Blogging Project Runway readers. Great photos, by the way!


Edited to add: BPR reader Kim shares her Maker Faire story here. Thanks Kim!
Posted by The Scarlett at 3:30 AM

The model in the inflatable dress looks like she's ready for blast-off!

Love Diana's concepts. I have to disagree, though, with the idea that her mobius strip bag is the first one-sided accessory. I've been knitting mobius strip scarves for years. I think I got the idea from Vogue Knitting but am not really sure.

It's really a fun and easy project. Just knit a scarf using open cast-on. Then, when you're done, twist one end before joining the beginning and end.

The little twist makes the scarf sit very neatly under your winter coat. And you can pull the back up as a hood if you like.

Regardless of the snafus I love that she takes risks. I am sure every show is a learning experience. :) I love the inflatable dress idea it just needs perfecting but how fun that sounds.

Diana was one of my early faves and I wished we could have seen more of her on the show. I'm super curious about that Mobius bag, and can't wait for more details to go up on her site about it.

Me too! I'm dying to see this mobius bag. There is a kiosk in the mall near my house that sells zipper bags. The entire thing unzips into a single long zipper. Are Diana's like these?

LK and starfish - if you click on the slideshow, there are a couple of shots of this bag.

From what I saw of Diana's bag during the show, the bag indeed does unzip to form a different style bag. It might be like the bag Laura K describes and does sound conceptually like what I saw, but it's hard to say. Take a look at some of the pics + see if that looks like what you're describing.