This is the final installment (I promise) of my BPR Tour recap. BPR groupies and other maladjusted souls can click here to relive the series from its inception.

Put yourself in Laura Kluvo's shoes for a moment. This is, admittedly, a fairly frightening prospect. Somehow in the span of a few short months you have gone from starting a small blog from scratch to becoming the primary source of information for one of cable TV's biggest hits. Lets imagine, if you will, that the breakaway star of this show sends you an e-mail one day saying he would like to meet you. What would you do? (The pant-piddling is automatically assumed in this scenario)

Many would jump at that opportunity and just keep the experience to themselves. But not Mom. By now, you know how big her heart is. She was gracious enough to allow Scarlett and me (and our companions) to tag along on a pre-arranged meeting with Tim Gunn himself. This now legendary gathering has become known inside the BPR sweatshop as "The Blog Producers Meeting".

Let's rewind a bit. When we parted ways at Emmett McCarthy's EMC2 boutique, several people were done for the day and headed for home. A small contingent led by JantheDanFan and Milton were on their way for their own fateful meeting with Tim and Daniel V at Macy's. Earlier, we had hoped to get a quick visit with both for everyone on the tour, but it did not pan out. It was very difficult knowing that we might get the opportunity to meet Tim later in the evening and not say anything about it to our new friends. This was supposed to be Laura's meeting with Tim. I just felt fortunate to have been included. 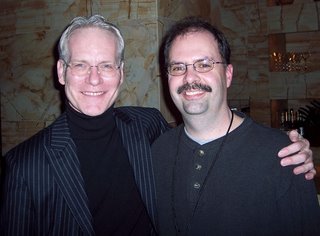 To continue reading Part 6 of Tbone's BPR Tour recap, click here!
Posted by Tbone at 8:44 AM

Ahem...for the record... I was NEVER in danger of any pants piddling.

I think it would be awsome to have Tim Gunn call me on my cell phone.

Wouldn't it be great if he could set up a way to call peoples cell phones or send automatic emails to remind them to watch PR during the third season. I totally would be all over that.

Can you imagine having 'Tim Gunn' show up on your caller ID? Hasn't happened to me ... yet.

You know here is the thing, I met him and yet I wasn't nervous at all. He is so warm and genuine that he puts you immediately at ease. And when he asks you a question, he really wants to know your answer.

I just had to comment!! Long time lurker of this site and big,big fan of both this site and the show. Oh how I wish I could have been there!! I loved all your recaps, I really enjoy your writing style!! It's so great to have others love the show as much as me. During the first season, I felt like I was the only one watching! Keep up the great work!

Scarlett, thank you so much for your plea on behalf of us Mac users. Whether or not it bears fruit, the effort is much appreciated.

Thanks too to Tbone, without whose penchant for detail, we might never have known what Scarlett was up to on behalf of the minority--and after all, it's whether the majority respects the minority that makes a democracy! (Excuse the excess--I can never hear mention of a soap box without wanting a piece of the action!

What a missed opportunity. Of course what I should have said was, "Excuse the WRETCHED excess."