You have one month remaining to recreate your favorite scene from Project Runway. If you've ever wanted to tell Andrae to, "Lighten Up, It's Just Fashion" or if you've secretly longed to pronounce an outfit to resemble 'Barefoot Appalachian Lil' Abner Barbie,' look no further than this contest. Designers, get out your whickety whack and start showing your creativity. And, to make matters more interesting (for some of you that have been holding back entries) we have our top prize: 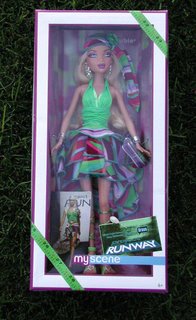 Yes, it is the
Sold Out
Nick Verreos
My Scene Barbie!
First Prize!

Enter often but enter by midnight, May 1st. Enter here. Just, ENTER!
Posted by The Scarlett at 8:04 AM

This is such a good idea! I can't wait to see all the funny things that the BPR readers come up with!

Does anyone know if there was a second production run of these dolls? I'm asking because we found some at a Toys R Us over the weekend! I thought I had read here about people not being able to get one and that they were selling for a lot on eBay so we almost bought all they had (they only had about six). Fortunately we thought better of it and just got two for ourselves. Later we checked eBay and they are selling for about retail. So I'm wondering what the story is on that. Any info? Maybe Toys R Us just found a lost shipment and we lucked out. Anyway, still a great prize for a contest!

I think I read that there was a second issue of these dolls. There were quite a few at the Times Square Toys R Us when we visited for the tour. BUT they weren't autographed by Nick!

No, that's right; Nick signing it really makes it a fantastic prize!
Thanks for the information; we really wondered if we had found some secret stash!

Great prize and incentive!
I haven't been holding back in submitting mine, but maybe holding back in working to finish..
How have entries looked so far? I hope it's been a good response.