From The Chicago Bureau

BPR's ace field reporter pc gives us more from her visit with DV in the Windy City last week: 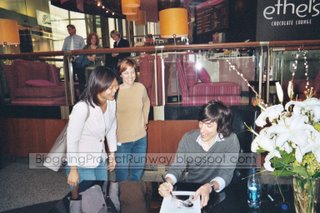 None of us knew that Daniel V was going to be in Chicago till the morning. When my friend from work, (as I said before, there's a small but strong army of us ladies who are major fans of Project Runway at my firm) emailed me about it, my response was, "I'll go if you want to go. If the line gets to long, we can just go to Sephora." That's me, always with a back up plan.

Daniel V was scheduled to show up at the signing at the Westfield Mall at 2. We initially didn't have high hopes of meeting him as 1) we had no idea before hand where in the mall he was going to be nor the set up and 2) we were extremely busy at work that day and so didn't leave the office until about 1:40. On the way there, we came up with the scheme of buying Daniel V a 40 so he would also have the relief of liquor while he was fulfilling his duties. When we arrived at the entrance to the mall on Michigan Ave., we saw the little table about 15 feet back from the entrance and the line that had already formed. There were only about 15 to 20 people in line at that time so my friend quickly took off to buy a paper camera and a 40 from the Walgreens down the street while I saved our place in line.

Right around 2, Daniel V showed up, like magic out of nowhere. As I reported before, he looked so cute in person, even cuter than he was on TV. And yes, fabulous hair in tow. He was very friendly with everyone and dutifully took photos. By the time we got to the front of the line however, the publicists started to limit 1 photo and 1 autographed picture per person. Sorry BPR - I really wanted to get an autographed photo for you.

What we said when we met Daniel V, my friend nor me can remember, except that I had mentioned that that BPR says a big hello. We just remember being ecstatic and completely charmed by his friendliness and cuteness (did I mention he was sooo adorable in person?). Our brief encounter over, we went merrily on our way with the gigglies and the autographed picture in hand, and yes, to Sephora. We wished we could've gotten him a 40, but nothing's perfect in life. I overheard the girls behind us contemplating getting him some chocolate but I don't know if they made that happen. I also don't know how many people total showed up, but there was definitely a long line after us.

Now, I just have to meet Chloe. 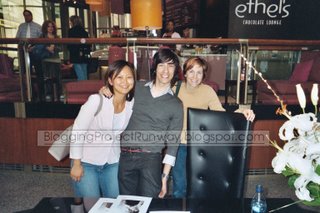 Daniel V where did you get those jeans? I Love them!!!! Thanks! for the pics :)

ohmagodd! that is soooo awesome. in other news, i just saw some lady win a daytime emmy award and she was wearing a kara janx straight off the runway!!! long purple dress w/ blue sash. i dont know how to email it or post it or anything. can someone find a pic?

Reading this blog makes me sososo jealous of all you U.S. people who get to meet the PR contestants!

Daniel is so cute. And that hair! ohhh that hair..*swoon*

I'm still excited to see news and articles about Daniel V and can't wait to see designs in stores; but I guess I'll have to. Thanks for the write-up and the pictures. Wish I was there......