Chloe Dao is living proof that the American Dream still exists. Born in Laos to Vietnamese parents, the political climate in her homeland forced her family to emigrate when Chloe was only 7 years old. With money literally stuffed in their shoes, her parents managed to bring Chloe and her seven sisters to Houston, Texas to begin a new life.

After graduating from FIT and spending several years working in the industry in NYC, Chloe moved back to Houston and opened her own boutique, Lot 8, named in honor of her siblings. Chloe brought a formidable combination of experience and design talent to Season 2 of Project Runway. Although her stature is small, she packed more fashion sense per inch than any of her competitors. She clearly was a force to be reckoned with. 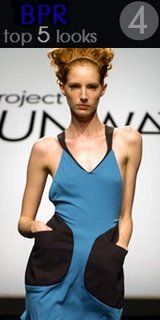 In Clothes Off Your Back, the 14 finalists were presented with an imposing challenge: How far would they be willing to go for fashion? After being wined and dined by Heidi, Tim delivers the shocking news. Using only the clothes off their backs, they were to create a new design. No one was wearing less than Chloe! With only a short jersey dress and a jacket at her disposal, she created a gorgeous halter dress with pockets. The design exemplified Chloe's aesthetic - minimal, modern shapes, clean lines and impeccable construction.

Chloe's showing in this episode helped define her run to the Final 3. She performed consistently challenge after challenge using her signature "Chloe Blue" and model Grace to their full potential. This dress garnered her first win on the show, and a spot on the BPR Top 5 Looks from Season 2. Congratulations Chloe! 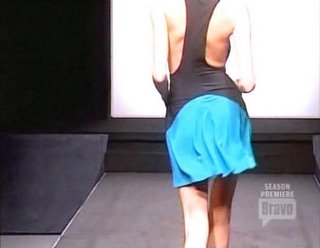 I love the dress. It gives me a little bit of a scuba feel though...sort of like Kevin Johnn's swimsuit last season.
Chloe is a very interesting and inspiring woman. A great designer!
And no, she didn't win this challenge just because they didn't want to give Santino "two in a row". She earned it!

You should include/credit the source of the write-up.

Anonymous, I wrote it. I used different sources for the bio material and tried to make a conscious effort not to copy what was already written.

If there is something in there that concerns you, please e-mail me. Thanks!

i didn't like this dress.
i don't see the big deal.

This dress didn't make my Top 5 but I did like it and thought that it was a worthy winner. Daniel Franco received a lot of votes for his COYB look also.

My favorite part of this episode was on the runway when the judges were complimenting DF (after giving him the torture treatment in RTTR) and his model Claudia was giving him loving pats on his shoulder. Very sweet.

This one didn't make my own personal top 5 but I respect what Chloe did with such a difficult challenge given that she was wearing the least that evening. And, you have to love the Diane Von Furstenberg complimented this garment at that challenge; high praise indeed for her efforts!

it's a pretty dress, but IMHO, very close to the original she started with, I never understood the fuss over this one.

she took a blue dress and make another similar blue dress with black pockets. Innovative? I don't see it.

Am I the only one who HATED this outfit?

Chloe's success with this challenge can't really be appreciated without a photo of her original outfit. She managed to make a dress that looks like it was made from scratch.

I wish Bravo's site had better photos and also included the back of the outfits.

Amen to that, desertwind. Many times the back of the dresses are really what makes some of these designs stand out. Would love a front and back shot of each on Bravo's "Rate the Runway" page.

There's a lot of haters on this post. Oh well. I adored this dress. I think why it won this challenge was that it looked the most wearable. Everything else, which the possible exception of Daniel Franco's, looked like someone had taken items of clothing and thrown them around in a blender. In this dress, it looked as if the materials were actually intentional.

I love everything Chloe and thank-you for sharing her story...

Thanks to Rich at fourfour I have added a view of the back of this dress.

Thanks for the picture from the back. This is one of my favorite dresses. Sadly I found out about BPR way too late to vote.

I think Chloe is a nice person, but her designs are really not my style.

Chloe made a completely different dress from other clothing. Unlike everyone else you cannot see any resemblance to the old outfit. It was a great look, I can see people wearing it.