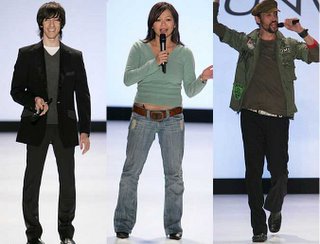 In the 'What's Your Line' challenge the designers were to create a gown to reflect their prospective Fall 2006 collection that they would show at Olympus Fashion Week.

I think the only designer that actually translated their look from the final challenge was Chloe. While her collection looked more 80's then 40's to me, I could see the flow of inspiration.

Assuming that his idea was chic simplicity, then Daniel was also successful...although not as literal as Chloe.

Santino's challenge dress and his line were on two completely opposite ends of the spectrum! But that's Santino for us...

call me crazy but isn't it hard to come up with a concept for a line under such conditions? I mean... I hope they could get a few weeks to decide the direction of their line and maybe even edit their ideas a bit.

I think it is only natural, that after stepping away from the crazy competition to alter your line a little. i don't know.. I have never attempted to put my ideas in one outfit let along a whole line.

I liked Daniel's line a lot and loved Chloe's. I can't be objective about Santino and the first few things were ok but then it just seems to suck for the sake of sucking. But like I said, I'm not objective.

Really, with the heavy-handed editing in this show, who even knows how things really go.

I bet they really asked each contestant to give reasons for why they would want EACH of the other contestants to go home... and then they just edit it to show them only naming ONE other person -- for maximum drama.

Same thing with that episode where Kara was in the jumpsuit. When they cut to Kara and she was speechless... how do we know she really didn't say anything? It's all in the editing.

Anyway. I liked all of gowns except for Chloe's weird big bum gown. Santino's was strange but unique. I liked his Fashion Week collection the best, followed by Daniel's. The other two collections were OK.

only daniel achieved the goal of creating a line that was reflective of his gown. personally, i think all the gowns, but santino's, were boring. his, as usual was too much, but he didn't play it safe. with that said it hit me at the end of the show that only daniel created a line that was indicative of the gown he created. it was clean, classic albeit a little drab. chloe nor santino's shows reflected the gowns we saw in ep. 11. however, i agree with asiangirl, it's hard to stick a concept for a show with the little time they had to think.

well, i think that chloe's line was pretty reflective of her gown in the last challenge. it certainly wasn't as well-made, but it had the sheekness and sophistication that her line had. the cut in the back was really reflective on her final, collection, which i think ROCKED!!

dan's collection also matched his gown, but i thought that his collection was kind of boring, personally . . . .

i think that santino is an ass, so i'd hate his collection even if it was good.

Chloe's designs are absolutely beautiful. THe colors are bold- the backs are exquisite- and the sewing fabulous. Way to go!!