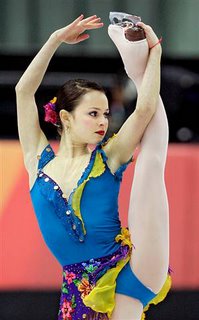 Thanks Florrie.
Posted by LauraK at 3:11 PM

Someone needs to forward this to Anne Slowey...

Ha ha, you all are cracking me up with all these ice skating costumes. Who knew PR would affect our views of Ice Skating costumes so much.

But really, i was always perplexed by the 'tootie' reference on his ice skating costume, because it was still covered, it just wasn't covered by the skirt a second time. at least his was covered, more than Zulema can say about her COYB challenge.

If any of the designers had put up this outfit, they would have been laughed off the runway.

I believe Sasha made a specific comment about Kara's outfit and how the fringe skirt wouldn't work with a skater's muscular thighs...an then here she is with a fringed skirt. I wish Kara had fared better, so this detail kinda rankles me.

hey everyone! I went to see the Banana Republic window in NYC today! For pics, go to my blog!
http://trishdish1002.blogspot.com
enjoy!

I just snorted in laughter from that title!
Thanks Laura!

I hope Nick gets great air-time with his skating fashion comments!
Imagine if he gets to chat with Katie Couric on Today about the costumes.
Yay Nick!

I saw an interview with Sasha Cohen. She designed the blue "French Flower Girl" dress herself. At least her "parts" are more or less covered, which is more than I can say about some of the thong-wearing ice dancers. Yikes!

careful mom, this is a family show!

i cannot wait for tomorrow, i am already excited. this should be so much fun, or at least more fun than the last episode. give me some diana, daniel f., emmett, kara, nick, andrae, raymundo. it will be good to see them all again.

You should have seen the ice dancing costumes. They looked half naked

Not to be too catty, but modesty is the last word that comes to my mind in association with skating costumes. I got the feeling that they just decided it was Emmet's time to go more than anything else.

Now, the main question is, how would Emmet fair in designing men's skating outfit? He did mention in the passing he was a mens wear designer....

Talk about a money shot. Where oh where is AuntieMame when you need her?!?!

Not only is there fringe on Sasha's skirt (that she wore in the short program today) -- there are also paillettes (around the collar)!

What really bothers me about this photograph is that you can actually see the seam of the cotton insert in the crotch of her white tights. Eeeww! Worse than panty lines. A girl that flexible should be wearing seamless, crotchless tights. I also think it's funny that her dress design is assymetrical -- didn't they give Nick a hard time about that?

Actually, I like her more since PR-if Tim says she's sweet, that's enough for me.

And I know this isn't really on topic-but it is about things showing-does it drive anyone else crazy that Heather's belly button is sticking out in her WYL gown?

My fiance, after watching the ice skating challenge with me, will throw the "There is entirely too much tootie being exposed" line out every now and then, just cuz he knows it'll crack me up....
On another note, if I were to ever try to get my leg to do what Sasha's is in that pic, I'm sure I'd never walk again. And I LOVE her costume. That blue is gorgeous!

Who was Anne Slowey, anyway, and was there ever any explanation why Nina Garcia wasn't on that episode?

I was so inspired by the tootie comment that I make up a drinking game. Everytime we see a full on shot of tootie, we take a shot. Hee hee.