Well, surely the "deadline" for notification of the Season Three designers is looming. We continue to get e-mails and comments from anonymous designers who are wondering if we "know anything." 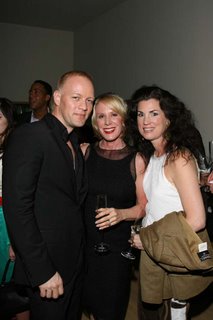 Of course we don't really know anything but we can benefit from the experience of previous contestants. We can safely assume that the show must begin filming fairly soon.

If you are still waiting and wondering, we can only suggest that if you haven't received a psychological evaluation and if your references have not been checked out then you may not be in the running for season three, but season four might be close behind - so don't give up hope! Remember, even if you don't make it onto Project Runway, you can definitely make it onto Blogging Project Runway. We would love to add your link and to publicize your events.

Anyway, I thought it would be fun to check in with a couple of our "Hopefuls" to see what has been keeping them busy while waiting to hear. Believe me, Karen Garrett has NOT been sitting still! Click here for her "report."
Posted by LauraK at 12:46 PM

Seriously, I have no idea how they are going to do any casting for Season 4 and film it this summer. Considering it has taken them nearly seven weeks (so far!) since the beginning of casting Season 3, I'm really curious what the process is going to be like.

She has a great attitude, carrying on regardless and following the dream. Some people may be waiting for PR to move them forward in life, don't wait. Get out there and make that path too, even if PR does not find some of these designers suitable for their show- there can only be so many on the show- does not mean many many of these don't have promise for an amazing future. Will be fun one day to read an interview with a world reknown fashion designer and they will say "They turned me down for Project Runway but that just made me want this dream more!"
Thanks for the cool interview.

Whew! Karen has been busy. Keep it up girl! See you on TV and hopefully, Fashion Week! Either way, keep the faith and never never never quit!

my guess is that if a hopeful hasnt heard by now then they probly wont be on the show. i'm sure they selected the designers for both seasons 3 and 4 weeks ago. especially since they already announced that season 3 will start on July 12. they're probly just not going to notify the designers that they have not selected.

i only have one problem with this situation, they should at least let the contestants who didn't make it know. just seems like common courtesy to me. i mean i have been through many interviews where i never heard back from the employer even though they said they would contact me. it is a little frustrating. at least have the nerve to say, hey you didn't make it.

I wish her lots of luck!!! as a "caster" for the show at the NY casting call and being featured in the blog for me was real good. Lots of friends saw the blog and local magazines here in San Juan, Puerto Rico wanted to know how was the experience for me. I've been very busy here in the island and will keep working it from Puerto rico , and you will see me again at the PR4 castings. Can wait to see the new season and what would they be up to...

i just heard that no one has been selected yet. thats the word from bravo and a very good source.