Wow! Aren't we all proud of "our" designers? What a great show. And all four have such different, unique and surprising looks! Without any hesitation I'm going to say that I like SANTINO's collection the best. In a way I hope that he is the decoy collection because he'll do just fine as an independent designer. I can't imagine him wanting, needing, of accepting any help from Banana Republic or anyone else. Congratulations, Santino on a gorgeous collection. 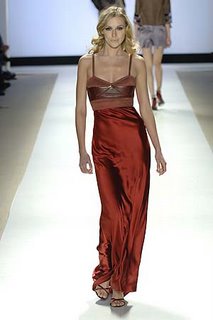 An aside here: Isn't this the model who tripped on Kara Saun's too-long hem last year?
What is her name? 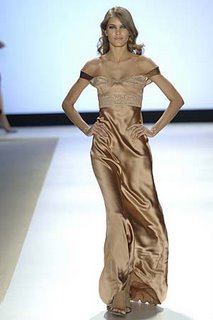 Next - how about KARA?!?! What a surprise! Of all the collections, hers is the one that I can actually picture my daughter (age 20, dancer in NYC) wearing. This collection is young and hip and okay URBAN even though I think that adjective has been way overused. Yes, I can see that the hats remind us of Jay McCarroll. And the tiered dress a little. But look at the rest - nothing like Jay or anyone else. Look at those colors! And that fabric. I love the way this looks like a real collection with elements that cross over from one design to the next and yet every single outfit is fresh and unique. If I were a magazine editor I would put this dress on the cover: What a beauty! 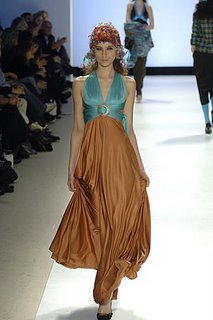 How is it that a man as young as Daniel Vosovic has the maturity to create a collection that could easily be compared to Calvin Klein or Ralph Lauren? I love this white coat. Look at the collar. At first glance, Daniel's collection might seem safe or unexciting, but look more closely. I think the judges might see some real invention here and genuine class. Congratulations, Daniel. 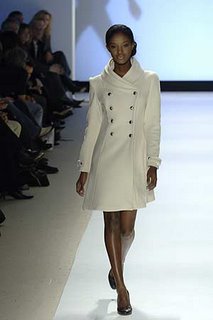 Chloe's collection was the biggest surprise to me. Some of the pieces seem retro 80's and I'm not sure if that was what she was going for. I'm not crazy about the shiny fabrics (the mauve and the gold). IMHO her prints aren't very youthful either. So, no matter how skillful or interesting a particular design is - this can not overcome it's execution in a less-than-ideal fabric. Throughout the season Chloe has shown elegance, restraint and good taste. She obviously has great skill and experience. I don't know what she was striving for here - It just doesn't seem like Chloe. I'll be anxious to see this collection in motion because I'm sure I am missing something. Of course I LOVE Grace!

ETA: Many many people have Chloe to WIN this. Others have Daniel. So, I have to give the producers credit for keeping things lively! 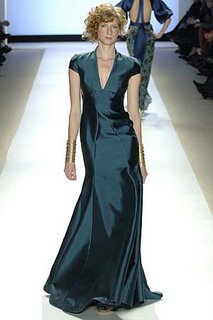 These are just my initial impressions. I'm sure I'll feel differently after seeing the show. Can't wait for that!
Posted by LauraK at 4:26 AM

The model that tripped in Kara Saun's dress was Leticia Birkheur(sp?). That's not the same model :-)

I liked the pictures I saw of Chloe's designs. And, I have to say that I'm disappointed to hear you say that her line wasn't "youthful" enough, as if that is a negative. WOW!! I know that the fashion industry is obsessed with youth. As long as we accept that as if it's a law of nature, it will remain that way. I love some of the youthful things as well. But I know I can't wear them. Even if they would fit :)), they look ridiculous on a more mature woman. There are styles that do look fabulous on older women but there is soooo little to chose from.

I think a lot of Kara's collection looks messy. All those tiers of fabric just makes it look haphazardly constructed and makes the girls look like pillows.

oh yeah, i forgot to mention -- during daniel's showing, rebecca (his model, and personally my favorite on the show), tripped on her train hem on the walk back up the runway. it was gasp-worthy for a millisecond, but whatever... the skirt was long and fluid and we all know how easy a heel can get caught in the mess...

btw, my alltime favorite piece from daniel is the nicky hilton dress, with the bold graphic print, with the confident strut of rebecca. it's definitely up there on my all-time fav PR outfit. that modern sass was definitely dearly missed in his final collection.

thanks for your fav pics, laura! i'm sure the judges will never cease to surprise us on their scrutiny and praises!

btw, apparently the empire waistline is back with a vengeance. a lot of pregnant-looking silhouettes on the runway, including baby phat, cynthia steffe, narcisco rodriguez, nanette lepore, reem acra, and the prominent bump at marc jacobs.

i tried to find instances of puffed sleeves a la chloe, and could only find more demure versions at jill stuart and alice roi. chloe's got the handle on that one! :)

I'm pretty sure that is Eden in the seafoam green top and plaid jacket and baby blue legs..... I can't believe I just described an outfit like that....

I'm still sticking with Kara and Santino. Kara for her use of color and flow. And fun. Santino's was just so much better and more reigned in than what he did on the show. Perhaps he just did that FOR the show?

Still a bit yawny on Daniels, though willing to admit that perhaps they're growing on me a tad. I just don't think there's anything, like, all that innovative about his stuff, from what I can see in these photos.

Chloe's, well... I just can't get over that Pepto-pink, pouf-sleeved, oversized monstrosity. Talk about Dynasty!

i don't think i could agree with you more. I thought chloe's prints were incredibly dull. And did you notice the weird fit on some of the dresses? like the gold dress had a pooch like the model was 5 mos preggers?? kara was also totally unexpected but in the opposite way. definitely reminded me of jay (not because of the hats necessarily), with all the colors in the palette and layers and such. daniel's has grown on me a little but i think he'd be better off maybe designing for a company or being on a team like at banana republic. i don't think he's going to break any ground but he does beautiful ready to wear.

I admire all the designer's collections and I think they all worked hard. If I had to pick a collection I would buy...hands down it would be Daniel's for every day and Chole's for a dinner party and Santino's for the sexy night outings and flirty day adventures. At first I thought Kara's was a hot mess, but after a second look I could see the types of Lindsey Lohan or Nicole Richie, Mary Kate etc.. wearing her style. Kara's collection had a
"jazzy-superlicious funk" to it that was fun, but just not for me..but very marketable.

Laura, I've seen some speculation on other sites that Kara was the decoy based upon the fact that she used only one of the models from the show.

Personally, I can't tell. I think the collections all looked worthy of fashion week.

maybe it's because i *am* older but I was just really thrilled with Daniel's collection -- that's style that works on women of ANY age. IT's sharp, it's elegant, and it can take sass from the body underneath the fabric (that shirt dress, f'rinstance).

At the same time I really got a kick out of Kara's stuff. I couldn't wear most of it -- i'm not shaped right for tiers of floaty skirts :o) but I know people who could and who WOULD and actually who DO walk around funked up in that way. I loved the colors.

Chloe's I also liked, but it was too ...shiny for me. I feel like every flaw I possess would be broadcast. It's clothing I would pine over, and wish I could wear, but I wouldn't purchase it for my own closet becuase I wouldn't feel comfortable in it.

Santino's...if I had no chest, and didn't need to climb up and down all the time, and spent my days/evenings shuttling between parties and spas, I'd be more interested. I like his fabrics, though.

The thing is, it's the older women who can afford this stuff.

just wanted to pass on what my younger sister's response to daniel's collection was:

"daniel's i liked because it was all very simple, which might not be what they are looking for, but i liked it because i thought he took every day outfits and made them beautiful."

i thought that was very well said. she liked chloes and santinos. she is only 15, but she did not like kara's collection at all.

For what it's worth, I think all the designers where channeling a little bit of Jean Muir in some of their designs -- her designs were feminine in a very elegant way, so I mean that in a good way. I still have to say, though, that' I'm underwhelmed by Chloe's final designs and impressed with Kara's -- relative to each's performance during PR2.

Some very wise and perceptive comments. I agree with nearly all of them, especially regarding Santino not needing the win as much as others and Kara's collection being such a delightful surprise. It really has a point of view and is fun and light-hearted, especially compared to Daniel's which is pretty humorless, if impeccably elegant.

The next few episodes should prove to be illuminating.

The Shoegate comment is priceless, and isn't it interesting that Heidi has been wearing a LOT
of KaraSaun this year. As I've always said "you can win by losing"
in unReality TV.

Hang in there, and steer the BPR ship into its final port with a steady hand and a hundred First Mates cheering you on.

i was likewise disappointed to hear that chloe's collection wasn't up to par. personally, i loved it. her fabrics may have been shiny, but so were kara saun's, and she almost won. as for those who say that her designes looked like they for an older crowd, i'd just like to say that i am 14 years old and her collection was my favorite.

daniel's was also nice, but it was a bit boring. i expected it to be sheek and sophisticated, but i also wanted it to to be a youthful collection, considering he is only 24 years old.

personally, i would never wear kara's collection, but i still thought that it was innovative and different. plus i liked the hats. which brings me to . . .

santino. "wake me out of my nap." after everything that santino's put us through on this show, his collection turned out to be bland, boring, etc. etc. i expected so much more from him, and instead we got a runway full of flowing gowns and a leather corset (???). i just didn't get it.