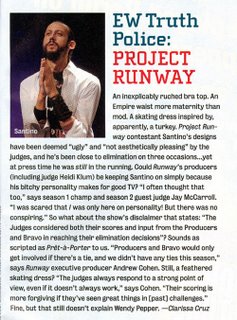 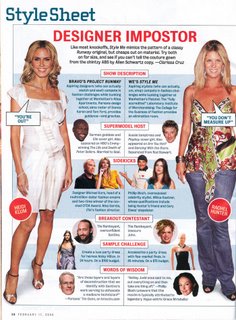 Click on these photos and you should be able to read the first one. I'll transcribe the second one soon. It's a comparison between Project Runway and another show called "Style Me."

Thanks Scott!
Posted by LauraK at 8:44 AM

Good to hear we're not the only ones questioning the rationale for keeping Santino on - and nice to hear someone from the show answer, whether or not he'll be believed.

On a totally different note, doesn't that picture in the 2nd article make it look like Nina's sitting on Michael Kors' lap?

I think Bravo could put the controversy concerning judging to rest if they just showed us which way each judge votes at the end and maybe a bit more of the discussion to get a better understanding of their rationale.

Who sided with Anne Slowey against Emmett in "On Thin Ice"? You mean to tell me that Nina was the only judge willing to yank Santino after his "deer in the headlights" lingerie fiasco? And the "scoring is more forgiving if they've seen great things in [past] challenges" certainly didn't help Nick out in "Makeover".

I've seen a couple episodes of Style Star. It seems like they have a lot of Santino's on that show (as in, contestants that they're leaving in for controversy/interest). There are so many different and intense personalities it's as if they scripted it that way. Also, Rachel Hunter is really mean.

All in all, I think it's pretty boring, but maybe that's just because I really, really like to watch the design process from start to finish. Watching a show about being someone's stylist doesn't really satisfy my need to see creativity in action.

I tend to believe the producer. For a while I really did think they had to be choosing the losing design in order to keep a specific person on the show but after almost two seasons of judging I'm starting to think that they are pretty consistent; they always pick the interesting mess over the boring design. Every time. I knew this way back when Austen created that "wedding dress" that almost made Heidi throw up. I knew they would pick his awful mess over the boring design and they did. I don't always agree with the judging but it's not as random as it may appear.