Just thinking about that decoy ... 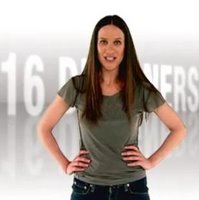 Yes, I know it's not about Kara at this point. But I'm still wondering about Kara's Fashion Week show. I'm also wondering if she was told to create thirteen ensembles orginally when the others were told twelve. Or did she, too, have to scramble at Mood to find another fabric to mingle with her collection? If so, did she get to select someone to help her? Was she really prepared last night to help a contestant since she had a show of her own to ready? Was she in that workroom that we saw last night just for drama?

Here's something else that I noticed when viewing the fashion week show ... Kara was the only one that didn't use 'her' model as the finale of the collection and that stands out now. Was that a hint that hers was the decoy ... or was it just by chance?

Anyway, we'd love to talk to Kara about these issues and more. And we'd love to hear from Tim, Heidi, Michael Kors and Nina Garcia their opinion of her collection.
Posted by The Scarlett at 2:06 PM

Wasn't there an interview with her that said she had the same benefits and constraints they did? I think you posted a link to it last month....

(I posted this on the previous blog)

Very good questions. I look forward to reading the responses.

Ooh, I hope we hear back from Kara about this.

I'm assuming she had the same budget; her collection looked too good to be done on the cheap.

At first I thought there would be no point in having her complete her 13th look at the last minute. But now I think the producers wouldn't have taken the chance of word getting out. I don't know if they had contact with each other during their "time off" but what if Kara were talking to Chloe and accidently let it slip that she was working on 13 looks.

I can't believe they would have forced Kara to help someone else while she was getting her own collection ready. She was probably just there for effect.

She said somewhere she had exactly what the others had, only less time. I'd love to know more...

Kara's collection was great! Since everyone knew that Kara was the decoy at this point, the "top three" designers surely wouldn't have expected Kara to help with their "final designs." Realistically, Kara must have been going through the same things that they were - last minute adjustments and fittings, locating accessories, etc.

The only clue that we had that hers was the decoy was the fact that she had fewer of the PR models - and that wasn't even a dead giveaway, but just a hint. I do wonder how Kara selected her models.... Whether she had the same restraints and requirements or not - her collection rocked. Go Kara!

Season 3 designers: prepare one more look than the challenge requires just in case the PR producers decide to do this again. ;) I remember reading Austin Scarlett complain the producers called him a month or two before fashion week and asked him to do a line. So, I just assume it didn't occur to the producers during Season 1 that a decoy was needed. If so, that suggests the producers were fully aware this time around that Kara would have to present a believable line come Fashion Week. I don't know if she had as much money or time, but she probably wasn't as short-changed as Austin.

Wasn't it noted that kara only had 12 pieces and the others had 13 after the stills from the runway show were online? I couldn't have sworn that was commented on...

You know Stephanie, I thought the same thing. I swear I remember a lot of discussion on that topic, but I just went and checked the pictures and Kara had 13 looks. Weird.

It's not surprising that Kara still put in her all for the FW line... I mean, it's still a golden opportunity to be able to show a collection at FW. It's almost like a gift for being a runner-up. Plus maybe it's one of those things where it's not for competition, but doing the best she can.

Can't recall if they had a caption at the start of the Reunion show saying how many days it was until the show. Any idea of how they managed to squeeze the Reunion show in with all the stuff they had to do? Did they give the last minute challenge before or after they taped the reunion?

It was the Friends of Reality TV interview where Kara mentioned that she had the same budget and similar restrictions except for time.

It was very curious that they did not address Kara's decoy line at all last night. We all knew she was there, she had to have been working her fanny off on it. Why not acknowledge the fact on the show?

And it would have been interesting to see who she would have picked to help her with the 13th look also. I still think if she had the same budget, let her be judged on equal footing like the others.

It will be very unjust if they don't acknowledge her at all next week.

KARA is my favorite designer from Season 2. She carefully plans and executes her work and her dress with the braided moss and materials was so cool. She seems so friendly and down-to-earth and actually returns my emails, etc. I have her Men's t-shirt from her website and I have to say the quality and design is amazing! I plan to buy more!!! We admire each other as designers and support each other, as I do one-of-a-kind hand-beaded jewelry. I think KARA is going to be HUGE! I can't wait for the Finale - part 2! Everyone in Chicago is talking about the Kimono dress!!!!

Haha. Santino returned my email once. That was special.

I think the real reason for the decoy has to do with the Bravo scheduling. To meet Bravo's corporate needs, the PR season started so late that they ran into OFW too early. There were still four weeks to go.

Would the ratings be the same if we all know who had won already?

All the designers signed contracts. The possibility of doing a decoy line must have been written in, especially after last year's last minute deal with Austin.

They didn't acknowledge Austin and they won't acknowledge Kara. Kara got to show her line to some fashion biz biggies at OFW and she got the New York magazine website spread.

I'm rethinking my original thought that the long purple/blue sash gown was the "extra." The hat matched the colors too well.

Unless Kara went out and bought 11 hats the day before the show!

Now I have no idea which one was number 13. They all look too finished, complex to have been done in a day. Especailly the layered looks.

But why not? All the Top 5 dresses from the season were done in that amount of time.

good questions -- related to some of these questions,I kind of wondered why Kara looked so upset/bothered at both the Reunion and the part 1 of the finale. I didn't think she was upset about Chloe not picking her, so maybe she was also freaking out about having to do the additional outfit -- we know that she tended to get pretty stressed/upset sometimes when under pressure, and this time she wouldn't have helpful Zulema to remind her to cry and cut.

Good questions. Here's another... Why does Project Runway just scheduled differently? Seems like if they started one week earlier they could avoid the whole decoy thing.

I think that the whole decoy thing is a great idea. It's a bonus for working your butt off, and getting almost to the end. It at least gets your name out there. It's an honor to show at FW. Also it causes all this drama that we love. C'mon you can't tell me you didn't love to speculate who the decoy was.

I don't think they told Kara about the 13th look. But it is possible that they just supplied Kara with an extra look that wasn't really hers.

Is it possible that the decoy collection had a decoy look?

sorry if this is totally random and if it's been addressed before but the hen in me is dying to know!

i don't know if daniel's been wearing that ring on his ring finger of his left hand the entire season but i JUST noticed it! is this glorious specimen of a man taken by another (hopefully also beautiful) man?

am absolutely dying to find out

Anyone else think one of the main reasons lots of us are so interested in Kara's collection (Besides the weird scheduling) is because it was frankly, a whole lot more interesting than a lot of stuff in the 3 finalists' collections?

During the show I didn't like most of Kara's pieces - largely because they were too boring! It was obvious she had skill with casualwear and knits (no matter how much credit Santino is given for the fabrics/patterns on his makeover look, the construction and sewing of the garments was Kara's work, including the great tee shirts) but I was bored, bored bored.

With the Fashion Week collections, WOW! Kara's is not to all tastes, but it has a point of view, doesn't play it safe, and frankly, I'd buy it and wear it. So now I would LOVE to hear/read judges' comments on it.

MAYBE, just maybe, this will be addressed in Tim's Take!

Now, I too, was pretty sure there were originally 12 looks for Kara!! I wonder if they told her 13 from the start so she was prepared but knew the twist when they were taping the reunion, which might account for her *deer in the headlights* look during the show. I can't think that they would have made the poor final 3 sit there and tape when they suddenly had an extra look to prepare-they would have been too worked up to really participate in the interview, no? Hmm-so when was this twist introduced in relation to the reunion?

Kara's collection at FW really surprised me at how interesting it was. Total opposite from her PR work. I guess her downfall wasn't the lack of talent or vision but the lack of being able to work under the pressure and time constraints of the challenges. I am anxious to see more of her in the future.

According to Nick's blog, they taped the Reunion episode on Wednesday evening, February 8. I'm thinking that they gave the 13th look "surprise" on Thursday morning, Feb. 9th. (Lupe did look a little hungover to me).

That gave them less than a day to put this thing together.

Oh, I do really hope that we get to hear the regular judges' take on Kara's runway collection! Her collection for Fashion Week was just glorious and I'd wear any and all of it a flash! Hopefully we at least get an appraisal of her work from Tim because he always offers so many keen insights into quality of construction, detailing and other important matters that don't always get due attention via the fuzzy medium of television.