Here is a recent e-mail from a reader:

I don't know if this subject has ever been introduced on your wonderful blog, but my friend and I are very curious about it. We both have recently ordered an item of clothing from Chloe (through the Bravo web site) and Kara (her website) and are positively excited just aching to receive it. We did wonder though, why the limited selection and why haven't the other designers made their designs available for purchase through the internet? We would love to see more items available from both Chloe and Kara, as well as Kara Saun (PRETTY PLEASE!), Jay, Andrae, Dan....the list goes on. The appeal of the show and the designers' designs have really touched a lot of people, especially those who don't live in New York, LA, or Houston. For those outside of those areas, we want to BUY!

I would very much appreciate it if this message was somehow disseminated to your community of bloggers to gauge others' reactions and hopefully the designers who pay attention to your web site will see it and get the message.

So, naturally I am wondering about the rest of us. Have any of you ordered any PR gear from the Bravo Site? Won any of the auctions? Ordered direct from any of the designers websites?

If the amount of stuff appearing on Cafe Press and eBay is any indication, we have a great demand for Project Runway merchandise. We want to show our colors! I personally ordered a hoodie with "Where the H*ll is my chiffon?" Then I sewed an asterisk-shaped sequin over the "e!" Ha! You knew I would, right?

Here are some of the latest offerings: I love this one - it's like a valentine and says "Happiness is a Warm Gunn." 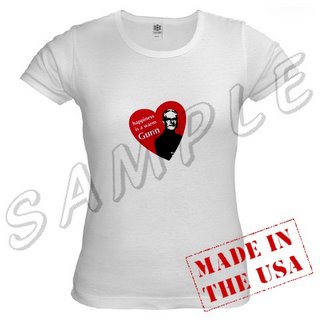 Then, there is more "Chiffon" gear at the lipstick mystic's shop.

And some WWSD? (What Would Santino Do?) gear here! Santino, how about some clothes? 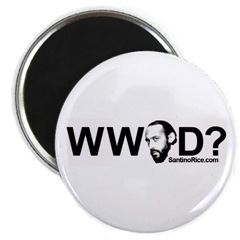 I am really surprised at the lack of stuff that Bravo has out, they are missing out on a goldmine! 2 ringtones? Come on, folks! Who wouldn't love a ringtone with some of the PR Musical content? Or some sage advice from The Divine Tim Gunn, or at least "Make it work"?

Thanks for featuring my shirt Laura!

I don't have any clothes, but I did by a barbie for my daughter. She loves it.

I am dying to buy some of Nick's clothing but alas...I need to shrink a little first. THat is my motivation to stick on my diet!!!

I bought two Full Dan Fan shirts from Cafe Press--one for me and one for my daughter.

Did I miss Daniel & Andrae's dress at BR or will it be available at another date?

I bought one of Jay's pink tees with the multi-color circles just prior to the end of season one. I remember it took a while to get it.

I purchased a men's t-shirt from Kara's website directly and WOW! It was called the "Blueprint Tee" and her most popular design. I love it! It is brown with orange. The quality is impressive and the design is unique with her label and KARA JANX name screened on the inside. I will be buying more from her collection. Kara is very friendly and down to earth and answers my emails. I am a jewelry designer: www.kennethfron.com myself and Kara said she admires my work and people that bead and make jewlery. She has one of my necklaces. I admire what Kara and all the designers do with fabric and materials. It's great we all support and encourage each other! I would not hesitate at all to please try a piece from Kara's website. Shipping was fast, too!

Hmm, mine looks to still be there when I do a search for "Tim Gunn".

Yes, don't be surprised if your stuff is removed from Cafe Press - I know it happened to Nethra. The "What Would Santino Do?" stuff is actually from Santino! I've seen folks selling stuff on eBay with Santino's image on it and I wondered if that was okay with him. I'm glad he has chosen to join it instead of fight it. Now if he would get his actual clothing designs up for sale - that would be great! I'm off to check out Kara's T-shirts. Thanks for the tip, Kenneth. I have four sons - and one husband - surely one of them would like a blueprint T!

...everyone involved directly with project runway has signed contracts that tie them up during the show.

all the items on eBay etc are posted by clever fans & merchants. only merch sold on the bravo site is approved by the show and benefits the show - not the design contestants. the show makes a huge investment in these "characters" and does not allow outside commerce nor copyright violations.

the merchandising skills of the show are beyond mediocre and you're right - they have missed the boat on a great opportunity to make extra money from crazed fans - like us!!!

FYI, nick's barbie is available at Toys R US in Times Square. They made 1,000 more and that's it.

nwolos, i love you! thanks for the barbie info. i just ordered mine through their personal shopper. from what she said, i think they will be gone soon. i was devestated when i didn't get one, and couldn't bring myself to pay the outrageous price they're going for out of principle. you made my month.

how does a person not in NYC get one of those barbies?! i just tried calling their store and of course got the answering machine.

i got them! thanks for letting me know.

pc, glad you got one too. but for anyone else who gets the answering machine, just keep calling back. i got a person on my second call. i let them know that this was my second call.