There have been several requests from our readers curious about how some of their other favorite designs fared in our Top 5 Looks from Season 2 poll. At BPR, you get what you ask for, so today we present to you our "Honorable Mentions" list. These are the designs that finished in 6th - 10th place based on your votes. The voting was so bunched up after the Top 3, any of these could have made our Top 5. 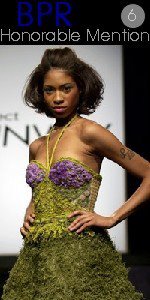 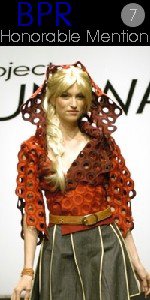 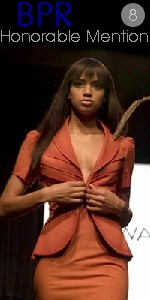 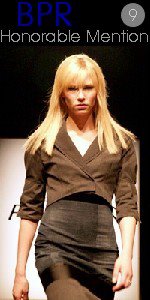 9thPlace: Daniel Franco - Clothes Off Your Back (33 votes) 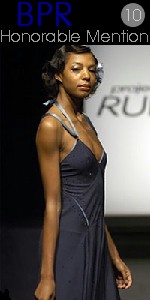 And finally credit where credit is due for this series. Madpawn at TwoP for coming up with the idea; The Scarlett for her outstanding graphic design and pictures; Rich at FourFour for the screencaps; Momma LK for editorial assistance and allowing us to play around in her backyard; and finally, all of you for participating in the poll and making BPR such a fun place to hang out. Thank You !
Posted by Tbone at 5:20 AM

I regret now that I didn't make time to participate (so many pressures in my life right now).

Several comments: it's gratifying to find Andrae's exquisite gown in #1 position. At least three times in earlier posts I categorically picked it (rather immodestly perhaps) as the preeminent design of Season II. At the time there was no posiitive feedback and only one or two times did I discover any other posts here duplicating my comment/observation. Maybe people were reading/listening, then went back and looked at the design again.

COYB seems to have produced a disproportionate number of winners. It certainly was one of the most, if not the most, challenging projects. (Note that Season III participants will now be prepared for this challenge.)
By contrast my own favourite episode (the BR challenge) has fared very poorly. I think that 2 or 3 of those designs (but probably NOT Daniel v/Andrae's) could/should have been in the final 10.
JMO

I'm thrilled for Andrae: he has the soul of a poet and his design, with all its symbolic undercurrents, is truly a piece of visual poetry.

Thanks so much for your work on this TBone, it was really fun! There have been some wonderful designs this season.

Last year there was immunity the following week for the winner of each challenge. So, the theory is that the designers "tried harder to win" last year, and therefore created more outstanding designs. But I don't see that there is any difference in the quality of the garments overall. Do you?

Generally, I like the idea of immunity in the early stages of the season. That way, at the start we have fewer designers just creating "safe" designs and remaining in the middle of the pack. Who want to see "safe" designs in Project Runway? Not me.

I'd like to see every designer determined to win every challenge.

Then about halfway through, when presumably we have narrowed the field to the top designers - drop the immunity. With fewer competing, they will have a greater chance to shine anyway - and immunity gets really weird when there are only a few. We don't want anyone to feel complacent when there are only four or five left. That's when we really want to see excellence.

All of these designs are wonderful and there is such great variety. Thanks again TBone!

Laura, I understand the issue of immunity and how it gave the designers incentive to excel beyond the middle of the pack.

Having just watched Season 1 for the second time, I have to say that there were clearly only 3 great designers obvious last year; this year, I'd say there were 6 or 7!

Thanks, Tbone for your great writing and the efforts in tabulating the results. Very well done.

First I agree with the scarlett on her post. And I think that would be the perfect way to handle the immunity. I was always kind of skeptical of multiple immunities, because like this season, it allows the designer to get away with a really bad design. However, the way she laid it out, I think would work perfectly.

Also, about the Honorable Mentions, I am so happy to see Kara Janx get that 6th spot. I just really grew to like her over the season. And Diana, I really like the way she tries to incorporate the science and technology into fashion. It is different. And I think with a little more work on it over the years, she will produce some amazing things.

And I have to say, as much as I am not a fan of Nicki Hilton, I think that challenge was probably the best of the season, or maybe the Garden Party, because they both produced multiple amazing dresses. The Nicki Hilton challenge had 6 really really strong designs and to me all contenders for the win, minus Nicki Hilton.

This was great, the commentary just terrific and a lot of work went into it. Like Scarlett reflected, didn't it show that there was a greater number of designers with a lot of talent than last year-remember when we got to the end of season 1 and Robert was still there? I would to see the first episode be a two part challenge so that someone is not eliminated on one design alone. I think as the designers get more savvy (Season 3 designers should be examining the first 2 seasons and developing a strategy/design philosphy) they do need to mix it up a little. I would like to see the designers given more time for the challenges so we can see more of their point of view in the designs. If you are asking them to make a gown that will reflect their collection, can't you give them a few hours-even a day to think about it? How would they know they weren't going to be held to using that piece and measured against it? No wonder they were a little safe!! I'd rather have a designer as the guest judge on the final episode than a celebrity, also. I'd rather see Diane Von Furstenberg here than Debra Messing. And at some point, I'd love to see a runway show of all of the designs at that point-maybe when you get to the second to last challenge (taking it from 4 to the final 3).

And a big hand to Laura K!!! For following through and really creating an excellent blog. Not to mention a place where we all feel it's like home - I do, anyway, don't you guys???

Did anyone see Andrae's "Social Scene" dress as a pre-cursor of the beautiful "Inspiration" dress?

I'm not sure if this is what praddicted meant or not (if it is I second the motion enthusiastically):

Going from the final four to the final three, I would like to see a runway show of ALL of the four designers entire output from the first challenge. This could probably be accomplished by the four remaining models (each comes out twice), then move on to the next designer's "collection". Each designer could join the models on the runway at the end of his/her segment, make a few simple remarks about their design philosophy and take questions/comments from the judges. I'd eliminate team efforts, except where the whole team (either 2 or 3) made it to the final four.

I think this procedure would be fairer to the finalists, refresh the judge's memory on their progress through the challenges and their cumulative POV. And how exciting for the fans!!!

A curious observation:
ONLY Nick and Andrae (two favourites with the fans from early in season II) have more than one design in the top 10!! Yet neither made it to the final 4.

I'm not sure if there's a winning strategy or not (future auditioners are probably dissecting the season like a chess game).
Peaking too early can be a problem. Yet Santino squeaked through. Impeccable construction coupled with a rather drab design can auf you or save you. Flambouyant design with fair to middling construction (a loose or uneven hem, a detached seam, excessive whickety whack (approved blog sp?!)
can give you a pass to the green room or "to the showers". The rationale behind the judging seems
sometimes to be almost frivolously ad lib or ad hoc. In a way I like that. The judges aren't machines, they aren't rigid unexpressive tabulators, and fashion isn't all technique and technicalities, that can be totaled in decimals. It's art as well. And as art, subjective values and intuitive undercurrents( that may be almost unconscious) come dramatically into play.
I wish we could hear more of the judge's discussions/debates. I wish the designers could also. Maybe they could be taped and those designers that choose to could watch them privately.

That is what I meant-if you measure up Daniel and Chloe's designs for the full season against Santino's-or even Kara and Nick's-I think you should get their "point of view", no? And-do you think that when they get to the final 3, everything done during the season is not considered(I don't know, I am really asking that question)? And most of all-what am I going to do after Wednesday, LOL??